Mobile gaming is fast becoming a thing in the gaming world, thanks to better-improved gaming graphics over the years. Gaming has moved from 2D adventures like Mario and packman to 3D gaming like Need for speed, mortal combat, etc.

But gaming didn’t just stop there. There are now hyper-realistic games where users can interact with objects like entering a building, driving a car, or picking up an object making gaming much more immersive than it has ever been. These improvements have led to the springing up of more mobile gamers who spend as much time as PC gamers spend on their PC. 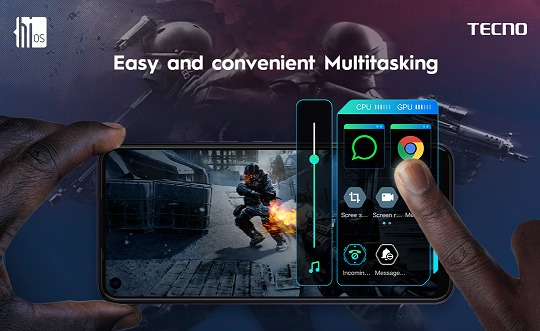 One thing gamers have in common is, they don’t like to be interrupted during intense gaming. When gaming on PC, this is quite easy and achievable. All you need to do as a gamer is to lock up yourself and put off your mobile device or silence them.

But when gaming on mobile, you still have other things running in the background. You have various notifications and phone functions running. This is one of the reasons Game mode was created on TECNO devices. It has so many features so users can experience gaming, uninterrupted.

Take, for example, you are playing Call of duty and we know it’s a live game, no option to pause the action, then this very important WhatsApp message pops up, all you need to do is just open the Game panel and tap on the WhatsApp icon. A floating WhatsApp window opens on a part of the screen while your game is still running actively. You can respond to the message using the floating screen and close it when done without closing or minimizing your game.

Another example is, you probably got stuck on a level in The Wolf Among Us and you don’t know how to pass that stage. You have tried every skill and tricks you know, it’s still not working. All you need to do is open the Game panel and open the browser. This opens without closing your game. You can then google the solution while still active in the game.

Have you ever tried the game mode?

JACEhttp://jac9ja
content editor on jac9ja both SCO, crypto, IT, Tech, and mobile I am a very skillful resource on IT and data analysis in the crypto market. as the world goes around we keep you updated with most valuable information to catch up with the season

Mobile Data Liberator & Telco Disruption at its finestMobile data in today's world has become a key part of the lives of individuals and...
Read more

Perfect Way To Navigate Your TECNO Phone Without Getting Bored

Perfect Way To Navigate Your TECNO Phone Without Getting BoredAre you tired of the boring home screen, or too used to the same design...
Read more

Defi Risks and How to Navigate Defi Protocols Safely

Defi Risks and How to Navigate Defi Protocols SafelyDecentralized Finance popularly known as Defi has its pros and cons, we will be looking at...
Read more